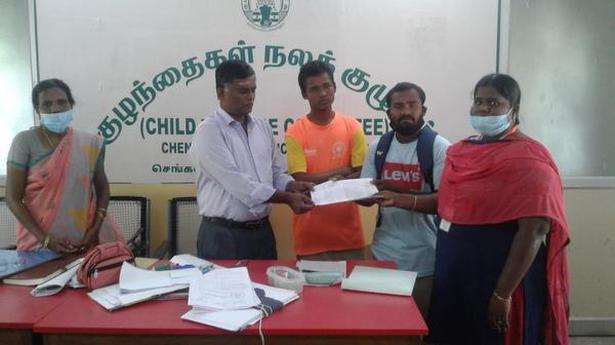 The boy had left his family home, and reached Padappai in Chengalpet district, and did not know how to get back home

Lochan Nayak had left his family in Odisha and was stranded thousands of kilometres away in Padappai, Chengalpet district. Not knowing the way or the means to go back to his village, the boy was roaming on the streets of Padappai when police personnel of the Manimangalam station, engaged in beat patrol, rescued and handed him over to the Chengalpet Child Welfare Committee (CWC).

The CWC of Chengalpet district handed over the boy to Sri Arunodayam, an NGO functioning from Kolathur in Chennai. Housing more than 115 children abandoned by their families, the NGO helped the boy get reunited with the family.

Iyappan Subramaniyam, founder of Sri Arunodayam, said the boy was handed over to the family in Badagoccha village in Odisha on January 8. After finding out that he only conversed in Odia, volunteers had spoken to him in his language and managed to get all his family details along with location of the nearest police station from his village.

They then got in touch with Ramesh Kumar, Inspector of the Surada Police station of Ganjam district and shared all the details of the stranded boy, including his photograph. Police officials, within two days, located the boy’s family and made arrangements for his return.

The boy, whose father had died, was living with his ailing mother and brother and had fled home. His elder brother Ranjan came to Chennai to take him back home. The boy along with his brother boarded a train to their native place on Tuesday, making this a happy 94th reunion for Sri Arunodayam.

You have reached your limit for free articles this month.

Find mobile-friendly version of articles from the day’s newspaper in one easy-to-read list.

Enjoy reading as many articles as you wish without any limitations.

A select list of articles that match your interests and tastes.

Move smoothly between articles as our pages load instantly.

A one-stop-shop for seeing the latest updates, and managing your preferences.

We brief you on the latest and most important developments, three times a day.

*Our Digital Subscription plans do not currently include the e-paper, crossword and print.

A letter from the Editor

Your support for our journalism is invaluable. It’s a support for truth and fairness in journalism. It has helped us keep apace with events and happenings.

The Hindu has always stood for journalism that is in the public interest. At this difficult time, it becomes even more important that we have access to information that has a bearing on our health and well-being, our lives, and livelihoods. As a subscriber, you are not only a beneficiary of our work but also its enabler.

We also reiterate here the promise that our team of reporters, copy editors, fact-checkers, designers, and photographers will deliver quality journalism that stays away from vested interest and political propaganda.